Allari Naresh is trying hard to score a hit and for this, he has changed gears and is ready with his new release Naandhi. The film has released today and let’s see how it is.

09.05 A.M: Allari Naresh introduced as Bandi Surya Prakash and he is sent to Chanchalguda Central Jail for a 14 days remand.

09.15 A.M: After 5 years, Priyadarshi, who is a YouTube channel guy, entered jail as Radha Prakash. He is like a regular prisoner in Chanchalguda for his controversial title cases.

09.40 A.M: With the murder of Social activist Raja Gopal, the movie shifts into another phase. Police investigation scenes are happening now.

09.50 A.M: During the investigation procedure, Police find some clues in Raja Gopal case, which leads them to Bandi Surya Prakash, and he gets arrested.

10.05 A.M: Emotional flashback ends. After 5 years, the case is still going on. The emotional scenes are shot well and they are quite engaging.

10.15 A.M: Here comes an intense action episode and a twist with Radhika Sarathkumar. Her character is good.

10.50 A.M: The movie starts picking up after Naresh and Varalaxmi Sarathkumar files a counter case on the Police officials, who framed the hero in the murder case.

11.05 A.M: Court scenes are going on. Some logics are good and we can find some slow narration in between scenes.

11.15 A.M: One on one scenes between Allari Naresh and Villain appears now. They are going down in the pace of the film.

11.40 A.M: Finally, the movie ends with Allari Naresh proving the whole crime point. The truth wins in the Good vs Evil fight. 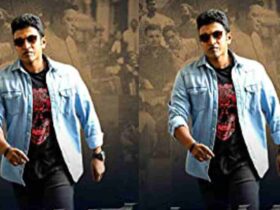 Police brutality is an issue not taken seriously in our country, especially when Tollywood often glorifies the idea of encounters and non-judicial killings. Naandhi takes the opposite route and showcases what we as a society lose when innocent people are punished by the system. Both the cast and crew of the film deserve applauds for bringing forth a subject that’s less explored in this film industry.

Surya (Allari Naresh) is an IT employee leading a happy life till he’s marked as a suspect in a high-profile murder case. As an under-trial prisoner, he doesn’t just have to prove his innocence in court; he also has to face abuse in custody. Advocate Aadhya (Varalaxmi Sarathkumar) takes up the case, fresh off law school. How the duo manages to navigate rough waters forms the tale.

Conclusion – So How did you like this article of Naandhi Movie Review: Allari Naresh’s Naandhi Tamil Movie Live Update. So You must tell by commenting in the comment box below.